In this lesson, you will learn to write and say the phonetic sound of Thai alphabets in middle-class consonant. There are 9 consonants, 7 sounds. Nature is a middle tone (a) with unvoiced sound (no air released). It’s important to remember the class of consonants because it will determine the tone of the syllable. 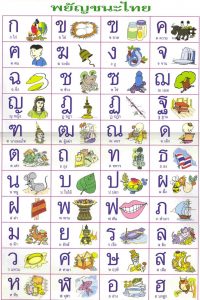 We normally write the Thai letter start from the left, for the letter that has a round head we start with the head first.